For this “special” Christmas 2020 because of Covid-19 and the necessary measures to protect the older adults, the organizations member of the International Federation of Petits Frères des Pauvres have innovated. They have found solutions to overcome the impossibility of organizing parties with the people they support.

Most often, teams prepared Christmas packages that were distributed on the doorstep. Cards were sent to residents confined to nursing homes and parcels were delivered to them. Phone calls were maintained and increased during this period.

But some associations had original ideas, for example in Hungary: the team of volunteers divided into small groups to sing Christmas carols in front of each person’s door. The older adults, delighted with these visits, sometimes sang for the volunteers who visited them. The organization also fulfilled the wishes of 40 elderly people by offering them a gift of their choice. This was made possible thanks to the generosity of Decathlon employees.

Les Petits Frères des Pauvres in Switzerland offered the seniors a calendar with a little note to be discovered each week of the coming year. 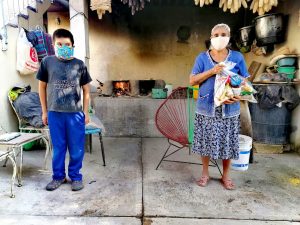 In Mexico, the Amigos de los Mayores organization gave an individualized gift to each senior.

In Chicago, 1,000 gifts were distributed to isolated older adults and on Christmas Day 600 of them received a festive meal. In France, France Bleue, a national radio station that is widely listened to by the elderly, devoted its December 24th broadcasts to isolated seniors, with testimonials from the Petits Frères des Pauvres organization. A concert by Sting with the Berlin Philharmonic Orchestra was broadcasted on this radio on the evening of the 24th. In Montreuil (near Paris), volunteers who were receiving an elderly person in their home, organized a cooking competition, in teams, and connected via video.

Offering a moment of joy at the end of the year 2020 has been possible for all the organizations of the Petits Frères des Pauvres Federation thanks to individual donors and the support of many companies. In Poland, more than 50 companies, most of which are new partners, provided financial support. This period was also an opportunity to develop communication campaigns on social networks, on television and in the press to raise awarness about the isolation and invisibility of the elderly during this special Christmas period.

Every year, millions of elderly people are left alone during the holiday season, but also throughout the year. 2020 has reinforced the isolation of older people around the world because, to protect them, we have deprived them of the relationships that make them want to live. The member associations and partners of the International Federation of Petits Frères des Pauvres have therefore shown imagination and mobilized thousands of volunteers to make Christmas 2020 a true moment of joy. Even with the Covid-19, in each country, the teams have found new ways to celebrate Christmas. These actions have shown isolated people that they were not forgotten in this festive period.