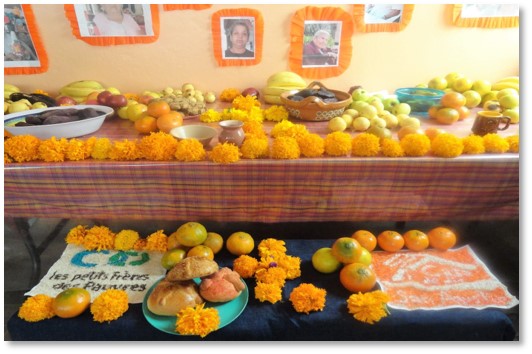 In Mexico, el día de los Muertos (the Day of the Dead) is one of the most important day in the country.
From October 31st until November 2nd, this is the opportunity for Mexicans to gather with their family and celebrate their deceased around the altars installed and decorated for this purpose. They meet in the cemeteries, wash the graves, decorate them and play music throughout the day. Far from the idea of ​​a morbid and morose day but rather, on the contrary, a colorful day of celebration!

The contexte was quite difficult this year. Indeed, Mexico was hit by a terrible earthquake in September 2017, which resulted in several hundred dead and many injured.
The mexican association was affected. One of their building, their car and some of the houses of the elderly served by the association were partly or totally destroyed.
Beyond the material losses, people were marked psychologically and the association allowed them to talk about it.

The action of the Freunde alter Menschen in Germany

30 October 2019
Discover how their passion for architecture has brought them together...…